A tribute to the late human rights defender Michael Ratner from Ricardo Alarcón.

END_OF_DOCUMENT_TOKEN_TO_BE_REPLACED

U.S. Intervention in Venezuela and the role of the OAS

“Imperialism’s assault on the Bolivarian Revolution is multifaceted. Now calls for OAS intervention are being heard. it is our responsibility to defend the sovereignty and self-determination of Venezuela against imperialist intervention,” writes Alison Bodine from the Fire This Time Venezuela Solidarity Campaign.

END_OF_DOCUMENT_TOKEN_TO_BE_REPLACED

Forum with family members of the victims of the right-wing violent protests in Venezuela, ‘Guarimbas’.

Desirée Cabrera: Mother of 19-month-old baby when her child was in a day care center in her government office building, that was attacked and burned by violent right-wing demonstrators. 89 babies were in that center.     Luis Durán: Luis Durán – Father of Elvis Rafael Durán, 29 year old worker who died on Feb. 21, 2014, beheaded by galvanized

END_OF_DOCUMENT_TOKEN_TO_BE_REPLACED

Documentary of the Committee of Victims of Violent Protests (Guarimba) 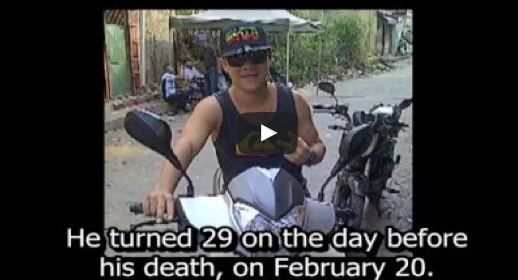 Watch this short documentary about the violent protests of 2014, led by the right-wing after Venezuela’s municipal elections, which caused the deaths of 43 people and injured hundreds. These attacks, called “guarimbas”, tried to overthrow the democratically-elected government of President Nicólas Maduro. A guarimba consists of blocking public roads with barricades made of barbed wire, tires, mattresses, and hanging galvanized

END_OF_DOCUMENT_TOKEN_TO_BE_REPLACED

The Recall Vote is the latest tactic in the U.S.’s Dirty War on Venezuela

In their latest attempt to topple the democratically elected government of Venezuela, right-wing forces are mobilizing to revoke President Nicholas Maduro’s presidential mandate. Rallying behind far right politicians and sworn enemies of the Bolivarian government, Henrique Capriles and Freddy Guevara, opposition organizers are attempting to gather tens of thousands of signatures to recall Maduro and undo 17 years of revolution.

END_OF_DOCUMENT_TOKEN_TO_BE_REPLACED

Sat., Oct. 29, 12 pm: March and Rally in Times Square, New York City on the occasion of the 30th presentation at the U.N. of the Cuban resolution against the U.S. Blockade. Other events around the country to be announced. END_OF_DOCUMENT_TOKEN_TO_BE_REPLACED