On normalizing relations with Cuba, where is Nancy Pelosi?

by Mark Ginsburg and Vicki Legion
reprinted from 48Hills
Jan. 7, 2022

On a cold, windy, and drizzly January 3, more than 30 people rallied outside the Federal Building in San Francisco to demand that Speaker of the House Nancy Pelosi sign on to a Congressional letter to President Biden, urging him to move toward normalizing relations with Cuba.

The Dec. 16 letter, signed by 114 members of Congress, called on Biden to “suspend US regulations that prevent food, medicine, and other humanitarian assistance from reaching the Cuban people … remove all restrictions on family remittances … roll back the Trump Administration’s restrictions on travel to Cuba … and remove Cuba from “the State Sponsor of Terrorism list.” 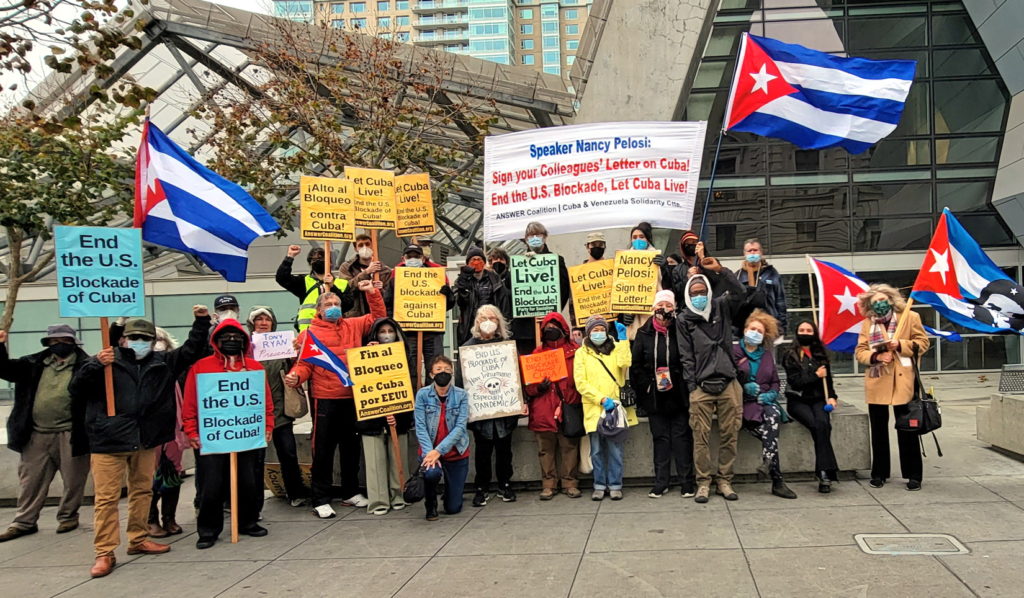 Activists call on Pelosi to support normalizing relations with Cuba.

The letter, which you can read here, was initiated by Reps. James McGovern, Barbara Lee, Gregory Meeks, and Bobby Rush.  The ACERE coalition (Alliance for Cuba Engagement and Respect), mobilized members across the country to advocate for sign-ons, which included Bay Area representatives Jackie Speier, Anna Eshoo, Mark De Saulnier and Eric Swalwell, as well as Jimmy Panetta from Santa Cruz. The signatories of the letter represented more than half the members of the Democratic Caucus, raising the question: “Where was the leader of the Democratic Caucus, Speaker Nancy Pelosi?”

The rally was organized by the ANSWER Coalition (Act Now to Stop War and End Racism), the Bay Area Saving Lives Committee and the Cuba and Venezuela Solidarity Committee, with speakers from these organizations as well as from CODEPINK, the Democratic Socialists of America, the Party for Socialism and Liberation, the Richmond-Regla Cuba Friendship Committee, United Front Committee for Labor Party, and Veterans for Peace.

Speakers at the rally called on the US government to “end the criminal US blockade of Cuba,” noting that United Nations General Assembly has voted overwhelmingly against this US policy for 29 years in a row. Speakers noted that the large majority of San Franciscans as well as the majority of people in the US favor such actions. In July 2020, the San Francisco Board of Supervisors voted unanimously to promote medical cooperation with Cuba and to end the embargo, in a resolution sponsored by Supervisors Hillary Ronen, Shamann Walton, and Aaron Peskin.  Many cities around the Bay Area have also passed such resolutions, with a total of 44 jurisdictions nationally going on record.

Speakers reminded those listening of what Speaker Pelosi said in 2008— “For years, I have opposed the embargo on Cuba”— and that she traveled to Cuba with then-President Obama when he formally announced the decision to re-open diplomatic relations.

Video from the rally (includes just a few of the speakers;
video of other speeches can be found on our Facebook page)