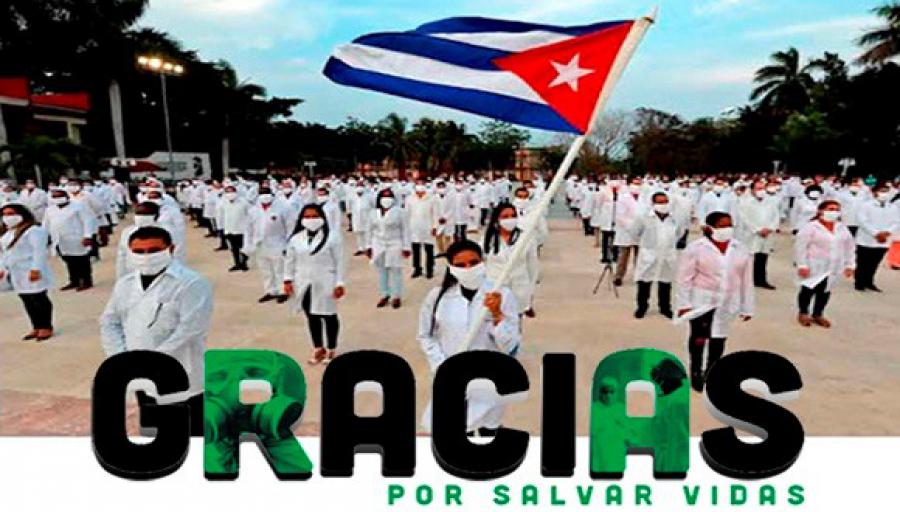 Today marks the 16th anniversary of that decisive September. It was the year 2005 and, after the hard hit of Hurricane Katrina in the southern United States, as a relief to the pain, Fidel bequeathed us the idea and the hope that a contingent specialized in disaster situations and serious epidemics distributes.

The doctors of the Henry Reeve contingent – the name they received in memory of that exceptional young American fighter who died fighting for the independence of Cuba – have been doctors of the world ever since.

Fidel himself prepared and enlisted a contingent of 10,000 doctors, with the initial purpose of assisting immediately and free of charge the people of New Orleans, affected by the catastrophe. However, the aid was rejected by the US government of George Bush.

That contingent, whose first members were made up of the brigade mobilized to assist the victims of Hurricane Katrina, would have the objective of cooperating immediately, with its specially trained personnel, in any country that suffered a catastrophe, such as major hurricanes, floods. , earthquakes and epidemics. Thus, said Fidel, a contingent of doctors was born for the world, but also for Cuba.

Despite the hundreds of deaths and the disaster situation, that contingent was not allowed to enter North American territory. But it did not take long to show its worth: just a few days later, on October 8, 2005, a brigade left for Guatemala, which had been affected by heavy rains and large floods. To assist that town, 688 health workers were sent, who would support a brigade present in that country since 1998.

In that same month of October, a major earthquake shook Pakistan and, almost by the time the brigade arrived in Guatemala, Cuban doctors went to the other side of the world to save lives, in the face of one of the most devastating earthquakes in the history of that South Asian country.

In solidarity and free of charge, for eight months, saving hundreds of thousands of lives, 2,564 Cuban health professionals remained in that country, deployed in 32 field hospitals.

From such an early date, the name of the Henry Reeve International Contingent of Doctors Specialized in Disaster Situations and Serious Epidemics has not stopped being heard, although more than once the mainstream media have tried to silence it.

In 2010, when an earthquake devastated Haiti again, Cuban doctors returned to that country, with which we already had a long history of collaboration. The earth shook on January 12, 2010 and in just 24 hours, on the 13th, the first medical brigade specialized in epidemics and disasters arrived. However, it is worth remembering that in Haiti at that time there were more than 200 Cuban health professionals, who were the first to attend to the affected population.

Just nine months later, our doctors would stand up to the cholera epidemic that claimed thousands of deaths on Haitian soil and whose control was due to a greater extent to the commitment, solidarity and humanism of the more than 800 Cuban doctors present there.

Then came other feats like the fight against Ebola in West Africa. There were 17,000 professionals from the Cuban health system who expressed their willingness to leave for Sierra Leone, Guinea Conakry and Liberia. 256 Cuban doctors and nurses marched to encounter a dangerous and unknown virus, and perhaps never before did the name of Cuban medicine shine so brightly, and one in particular: Henry Reeve.

In little more than three decades, the examples of humanism are innumerable. Between 2005 and 2019, 25 Henry Reeve brigades, with a total of 9,428 collaborators, worked in 21 countries and cared for more than 3.6 million patients. Now, over the course of 16 months (February 2020-June 2021), they have rewritten heroic pages.

To combat the covid-19 pandemic, 57 brigades made up of 4,982 members have carried out solidarity missions in 40 nations and have provided assistance services to more than 3.1 million patients.

They came to several of them for the first time, among which are Italy and Andorra, in Europe; Togo, in Africa, and the United Arab Emirates, in the Middle East. Likewise, the Turks and Caicos Islands, British Virgin Islands, Anguilla and Montserrat, all island territories of the United Kingdom in our nearby Caribbean environment, which requested help from Cuba to contain covid-19.

Countless personalities, national and international, from science, politics and culture, Parliaments, Governments, friends and grateful peoples have nominated the Henry Reeve contingent for the Nobel Peace Prize. In 2017, the World Health Organization (WHO) awarded this Cuban medical contingent the Lee Jong-wook Memorial Prize, in recognition of their work in the face of natural disasters and serious epidemics.

The recognition of such noble work is always a reason for joy and an act of justice with those who have contributed to heal in the most remote places and in the most difficult circumstances. But it has not been prizes, awards or distinctions that have promoted Cuban doctors and those of Henry Reeve, but the commitment to the most humane of vocations.

In these days of pandemic they have once again demonstrated their courage and have made themselves felt in that place first, where they were born and where they belong: Cuba.

Hundreds of them have left without hesitation to other provinces of the national territory to contain the epidemic, and many have arrived in the homeland to go directly to the red zones of our hospitals, with the aim of supporting the thousands of health workers who have also been in this tough battle for months.

When in 2005 the architect of this work, Fidel, said that “before you, this humanity will one day have to bow, before you future generations will have to bow …”, he was not mistaken.

Thanking them every day for being worthy representatives of the Cuban medical school, for the courage, dedication, sensitivity and commitment with which they represent Henry Reeve, is an obligation.