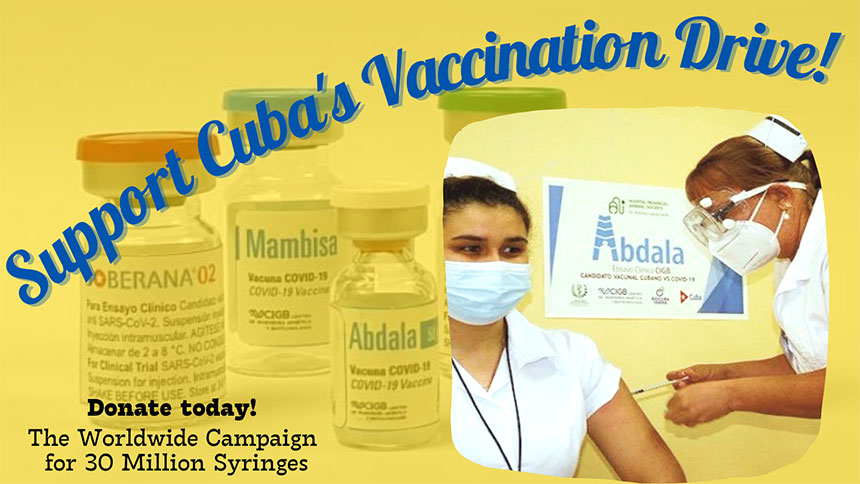 Cuba has developed a remarkable five lines of vaccine, with two — Soberana 2 and Abdala — now tested and in active use to vaccinate the people of Cuba. Cuba will likely become the very first country to vaccinate its entire population with its own vaccines! This is the scientific and medical powerhouse of Cuba. Because people, not profits, are the driving motive in Cuba, biotech scientists work together, in full cooperation with the Ministry of Public Health and other agencies, for the people’s health. Cuban doctors have provided care to thousands of patients during the COVID crisis in dozens of countries.

But the U.S. blockade has intensified against Cuba, severely limiting the country’s ability to obtain raw materials and in particular, syringes in its plan to vaccinate the whole population in the coming months. Just during Trump’s term, he signed 242 measures against Cuba, including banning remittances from Cuban-Americans to their families in Cuba. And so far, Biden has not moved to lift even one restriction against Cuba.

The ANSWER Coalition and Cuba and Venezuela Solidarity Committee are joining with Global Health Partners, the Saving Lives Campaign, The Peoples Forum and many others, to raise money to send at least 20 million syringes to the island. GHP has obtained an export license from the Commerce Department. All systems are go, just the money is needed!

Use the links below to donate!

Cuba has vaccinated 415,000 people, including through its testing phases. With a population of 11.3 million, at least 30 millions syringes are needed, with 3 injections for each person to be vaccinated. More than 140,000 Cuba health care workers have already been inoculated.

With all of Cuba vaccinated, the people will be safe and Cuba can open up the country once again to international visitors. Tourism and the country’s reopening is needed for the revival of an economy severely hampered by the U.S. blockade and the pandemic. Cuba had to close down tourism, a principal source of income, to minimize the occurrence early in 2020. In 2019, Cuba received 4.5 million tourists. With COVID, that number became virtually zero in last year.

How do your donations help Cuba?

People around the world are mobilizing in solidarity with Cuba to overcome the U.S. government’s deliberate and calculated attempt to intensify the deep harm caused to the Cuban people by the 60-year blockade. With your help, we can all concretely support Cuba’s renowned health care system, where the people come first. All donations that the participating organizations collect will go towards the purchase and shipping of the syringes.

Cuba is known worldwide for its selfless generosity in saving millions of lives in dozens of countries, and offered to send 1,000 doctors and emergency hospitals to New Orleans and the Gulf Coast after Hurricane Katrina. Cuba has trained dozens of U.S. students in medical school who provide health care in underserved U.S. communities.

Please give generously to the Syringes campaign!
Every dollar you donate will be directed to the campaign that all organizations are a part of.

To donate an amount other than the ones above, click here

If you wish to donate via check, make your check or money order payable to “ANSWER Coalition” and mail to: