May 25, 2020
by Gloria La Riva
reprinted from Liberation News 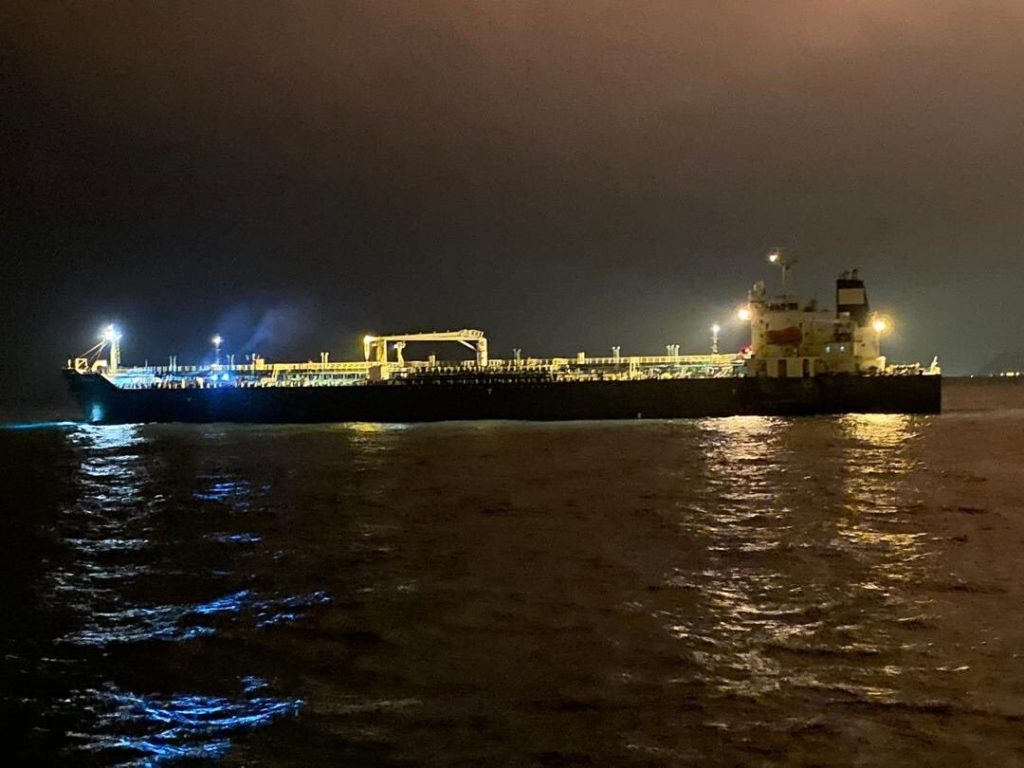 The enhanced U.S. military presence in Caribbean waters did not deter Iran as the first of its five giant tankers full of gasoline and refinery supplies reached Venezuela’s waters late Saturday, May 23.

It docked today in the port of the El Palito refinery, 100 miles west of Caracas. At the port, the new Oil Minister Tareck El Aissami welcomed the ship: “This is how self-determination of the peoples is expressed. … we cannot allow any power to assume the role of super police, to dictate prohibitive measures here and there.

“How fortunate we are to count on Iran in these times!” he concluded.

Defense Minister Vladimir Padrino described Venezuela’s military ships and jet fighters accompanying the tanker “Forest” as it approached the shore, and said, “This is solidarity between nations that marks a milestone in world geopolitics!”

The ship’s arrival is a major victory for both Iran and Venezuela. Iran’s generous act of solidarity extends a vital lifeline to the Bolivarian Revolution even as the Trump administration is stepping up its regime change campaign.

The Forest is close to arrival and three more ships, the Petunia, Flaxon and Clavell, will reach shore soon. They carry a reported total of 1.53 million barrels of fuel, plus spare parts and refining additives.

Gasoline has been virtually unavailable at the gas pumps for weeks.

Iranian President Hassan Rouhani has warned that Iran will respond if its ships are challenged in any way. “If our tankers in the Caribbean or anywhere in the world face trouble caused by the Americans, they will also be in trouble.”

Incredibly, Trump, Mike Pompeo, Elliot Abrams and previous U.S. officials have openly evoked the hated Monroe Doctrine regarding Iranian and Russian support for Venezuela. Former National Security Advisor John Bolton boasted in March 2019, “We’re not afraid to use the phrase ‘Monroe Doctrine’ in this administration. And one of the purposes of the Monroe Doctrine was to prevent foreign interference and even recolonization.”

Apparently U.S. imperialists think the Middle East is their backyard as well, with dozens of bases occupying numerous countries in the region. Iran is one country where the U.S. presence is not welcome and is therefore under sanctions and military threat as well.

Iran and Venezuela have had close economic and political ties since Hugo Chávez’s presidency. They invested in each other’s oil industry. Tens of thousands of new housing units have been built by Iran in Caracas as part of the 3+ million homes provided in the Great Venezuelan Housing Mission (GMVV).

Iran’s generous donation of fuel is especially notable as the sanctions are harming its own oil production. According to the Venezuelan site MisionVerdad.com, up to 25 percent of Iran’s 160 refineries are shut down by the U.S. blockade’s effects.

Striking the heart of Venezuela’s strategic resource has been Washington’s principal economic line of attack to try to destabilize and overthrow the Bolivarian Revolution.

It began with the 2002-2003 U.S. sabotage shutting down oil production for five months, from which it never fully recovered.

Early 2019 brought a steep decline in the economy, including skyrocketing inflation. The Trump sanctions included the illegal confiscation of the country’s international bank and gold reserves. Medicines, food and other essentials for life have been blocked. Only the Maduro government’s direct intervention with massive food supplies to more than 6 million families and other government subsidies have enabled the people to survive and resist the blockade.

Venezuela’s CITGO gas station and refinery properties in the United States — worth over $8 billion — were seized by Washington last year. 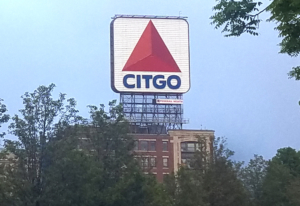 The latest blow to CITGO was Friday, May 22, when U.S. District Court Judge Leonard P. Stark in Delaware ruled that CITGO’s entire assets can be auctioned off to pay a $1.4 billion debt that Canadian gold mining firm Crystallex, claims from Venezuela. He acted after the U.S. Supreme Court refused to hear Venezuela’s appeal on May 18 against Crystallex.

The case reaches back to 2009. Hugo Chávez’s government decided that any mining of strategic natural resources of the country, including gold, bauxite, diamonds and uranium, would be controlled and operated by the state, favoring the people over foreign extraction companies.

Crystallex had had a provisional gold-mining concession for several years but was never given final approval. When it was denied a permanent concession in 2009, it filed suit.

Friday’s illegal U.S. judicial ruling allows CITGO’s properties to finally be liquidated to settle Crystallex’s claim. Others stand to gain by their claims against Venezuela, including ConocoPhillips.

Friday’s court ruling is just one example of the U.S. government’s illegal claim of jurisdiction over the wealth of another nation, and the ruling class’s power to wage economic warfare through financial, economic and commercial, unilateral coercive means.

This is why Iran’s defiance of the Pentagon’s encirclement of Venezuela is so important. It shows that International solidarity is the key to defeat U.S. imperialism’s plots.

The real cause of Venezuela’s oil decline

While Venezuela has vast oil reserves, its oil industry is especially vulnerable to U.S. sanctions, but not only because the CITGO holdings were easily stolen. Its internal oil industry is highly dependent on U.S. technology and chemical additives needed for production. Mexico, for example, became heavily indebted to the United States due to the fact that its oil operations are a product of and rely heavily on U.S. technology.

Oil refineries are highly complex entities and need constant maintenance, replacement of parts and upgrading. The sanctions have made it impossible to import parts or additives for oil and gasoline refining.

Another principle factor in Venezuela’s difficulties is the worldwide drop in oil prices due to overproduction and the sudden drop in demand for fuel caused by the Coronavirus pandemic.

Although Washington has not let up on its intent to overthrow the Bolivarian Revolution ever since Hugo Chávez took office in 1999, it escalated in January 2019 with the self-naming of Juan Guaidó as “interim president.” He was immediately recognized by the United States because the United States was his sponsor.

The Trump administration expected its coup plot to succeed in a matter of days or weeks. It did not.

Undeterred, U.S. leaders have carried out a sustained economic war of sanctions, outright theft and confiscation of Venezuela’s assets worldwide.

It has now been 16 months and the U.S. government is no closer to defeating the government of socialist president Maduro and the people’s resistance.

On the contrary, more than 3 million civilian militias members are mobilized throughout the country. The Bolivarian armed forces and civilian population have repelled numerous coup and destabilization plots. The latest was the attempted invasion on May 3 and 4 by a small gang of U.S. mercenaries. The captured invaders say publicly they believe they were acting on behalf of Trump.

Mercenaries aside, the U.S. imperialists may be preparing for a more direct military attack.

On April 1, Trump announced the deployment of a U.S. Navy armada including destroyers and troops to the Caribbean near Venezuela’s coast, with the absurdly false accusation of “narco-terrorism” against President Maduro. This followed U.S. Attorney General William Barr’s indictments against Bolivarian leaders, with a $15 million bounty on their heads.

U.S. economic warfare and other forms of intervention did not begin with the Trump regime.

In April 2002, President Hugo Chavez was briefly ousted in a U.S. backed coup, but was quickly returned to office by loyal elements of the military backed by the mobilization of the people. It was followed by the 2002-3 U.S.-inspired oil shutdown. That was the George W. Bush administration.

It is not any particular president or party that drives the U.S. drive toward war and domination. It is the capitalist system itself. Trump has tried to crush Venezuela, Cuba and Iran. He will continue to fail. So will the next president, whoever wins in November.

In the meantime, it is critical that peace-loving people worldwide be prepared for new U.S. aggression on Venezuela, Cuba, Iran or elsewhere.

As the United Nations prepares to vote for the 30th consecutive time to condemn the unjust, illegal, and immoral U.S. Blockade of Cuba, actions are scheduled around the country to say "The World Stands with Cuba!" END_OF_DOCUMENT_TOKEN_TO_BE_REPLACED

Sat., Oct. 29, 12 pm: March and Rally in Times Square, New York City on the occasion of the 30th presentation at the U.N. of the Cuban resolution against the U.S. Blockade. Other events around the country to be announced. END_OF_DOCUMENT_TOKEN_TO_BE_REPLACED