Paramilitary invasions in Venezuela: Made in USA

May 4, 2020
by Nic de la Riva
reprinted from Liberation News 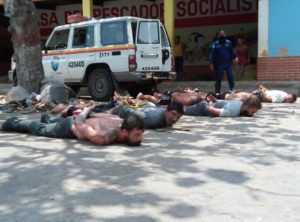 In the early morning of Sunday, May 3, the National Bolivarian Armed Forces of Venezuela along with the Special Actions Forces of the Venezuelan National Police repelled an armed invasion by speedboats off the coast of La Guaira, less than an hour from the Venezuelan capital, Caracas, recalling past U.S.-backed paramilitary invasions in Latin American states such as the Bay of Pigs in Cuba and the Contras in Nicaragua. As we go to press, the government has issued a maximum alert, with other terrorists having been apprehended in Chuao, west of La Guaira, and other plots suspected.

Venezuelan authorities captured various weapons such as 10 rifles, a Glock 9mm pistol and 2 machine guns along with loaded cartridges of various calibers. Other objects captured were identification documents, satellite telephones, uniforms (including a helmet with a U.S. flag on it) and two notebooks detailing the operation, known as “Operation Gideon.”

Reports have stated that from eight to 10 invaders were killed in the first encounter, along with two being captured. One of the captured is reported to be an agent of the U.S. Drug Enforcement Administration. 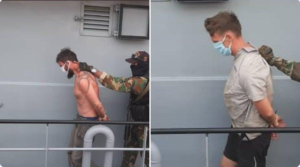 Americans Luke Denman and Seth Barry , captured by Venezuelan authorities on the coast of Aragua state. Both are U.S. military veterans from Texas, contracted with Silvercorp and are associates of Jordan Goudreau.

The origin of the speedboats has been confirmed through GPS data on the satellite telephones as taking off from Riohacha, Colombia, which is located in the La Guajira department that borders Venezuela.

While this attempted invasion was taken care of swiftly and efficiently by the Venezuelan government, further action and investigation will be taken to protect Venezuela from more paramilitary invasion or the activation of paramilitary cells already within Venezuela.

Both the U.S. government and the U.S.-backed part of the opposition led by self-proclaimed “interim president” Juan Guaidó have denied any involvement in the invasion. However, several non-state actors are coming forward and contradicting these statements.

The most vocal of these actors is Jordan Goudreau, a former U.S. Special Operations soldier, who currently owns Silvercorp, a paramilitary contractor that specializes in “strategy” and “procedural executions.” He claims to have been working for months with the U.S.-backed, Guaidó-led faction, formulating a 70 page, $212 million contract to train paramilitaries, many of whom are deserters of the Venezuelan Armed Forces, in order to execute what he confirms as Operation Gideon. This operation planned to invade Venezuela as near to Caracas as possible in order to take Caracas and overthrow the Maduro government.

Goudreau has produced the contract, which includes the signatures of Juan Guaidó, Juan José Rendón, and Goudreau himself. He has even confirmed that Operation Gideon is the same operation outlined by Cliver Alcalá, the Venezuelan ex-military officer who turned himself into the U.S. government after the U.S. placed bounties of millions of dollars on the heads of not only Alcalá, but high Venezuelan officials such Nicolás Maduro and PSUV vice-president Diosdado Cabello, falsely accusing them of being involved in “narco-terrorism.” It is language strikingly similar to that used against Panama’s leader Manuel Noriega before the December 1989 invasion by U.S. imperialism.

But Goudreau also details the vacillation and “backstabbing” of the opposition who would not pay his company’s $1.5 million retainer, and accused opposition leaders of hoarding million of dollars, funds stolen from Venezuela by imperialist countries and given to the U.S.-backed opposition.

Aside from the statements of Goudreau and Alcalá, other connections can be made linking the invasion to U.S.-backed Contra style operations originating from Colombia that are also connected to the Guaidó faction. For example, the captured assault rifles, which are not the same used by Venezuela’s Bolivarian National Armed Forces, match those used in the attempted coup by Guaidó and Leopoldo López on April 30, 2019.

The Venezuelan government and its civic-military union have been preparing for invasions like this as part of its initiative “Escudo Bolivariano” or “Bolivarian Shield.” Recently, Venezuela has intercepted the illegal transport of arms into Venezuela, for which Alcalá has already claimed responsibility. They have also arrested members of the National Guard who allegedly robbed weapons from military detachments in Miranda. They have captured various leaders of the armed opposition such as Rubén Darío Fernández, known as “Búho” who has confessed that another leader and confidant of Alcalá, Robert “Pantera” Colina, was heading a terrorist squad with a goal of assassinating members of the Venezuelan executive branch. “Pantera,” who is seen on video calling for the “liberation” of Venezuela, is reportedly among the eight-10 killed during the La Guaira attempted invasion. 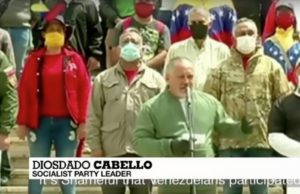 President of the Constituent Assembly Diosdado Cabello confirms that they have been expecting invasions like this, and is in fact expecting more, which has been confirmed by Goudreau in his statements that other cells are activating. But despite the violence of the U.S.-backed opposition, which tries to take advantage of an economically blocked country in the middle of a global pandemic, Cabello made the following statement on the “arrogant” Venezuelan right-wing,

As the United Nations prepares to vote for the 30th consecutive time to condemn the unjust, illegal, and immoral U.S. Blockade of Cuba, actions are scheduled around the country to say "The World Stands with Cuba!" END_OF_DOCUMENT_TOKEN_TO_BE_REPLACED

Sat., Oct. 29, 12 pm: March and Rally in Times Square, New York City on the occasion of the 30th presentation at the U.N. of the Cuban resolution against the U.S. Blockade. Other events around the country to be announced. END_OF_DOCUMENT_TOKEN_TO_BE_REPLACED