Coronavirus response: why Cuba is such an interesting case

Some countries seem to be weathering the coronavirus pandemic better than others. One country that moved rapidly to deal with the emerging threat was Cuba.

Cuba has several advantages over many states, including free universal healthcare, the world’s highest ratio of doctors to population, and positive health indicators, such as high life expectancy and low infant mortality. Many of its doctors have volunteered around the world, building up and supporting other countries’ health systems while gaining experience in emergencies. A highly educated population and advanced medical research industry, including three laboratories equipped and staffed to run virus tests, are further strengths.

Also, with a centrally planned, state-controlled economy, Cuba’s government can mobilise resources quickly. Its national emergency planning structure is connected with local organisations in every corner of the country. The disaster-preparedness system, with mandatory evacuations for vulnerable people such as the disabled and pregnant women, has previously resulted in a remarkably low loss of life from hurricanes.

Also, the pandemic comes at a particularly difficult time, as tightened US sanctions have sharply cut earnings from tourism and other services, deterred foreign investment, hampered trade (including medical equipment imports) and obstructed access to international finance – including emergency funds.

Given these strengths and weaknesses, Cuba provides an interesting case study in responding to the current pandemic.

Cuba’s reaction to the coronavirus threat was swift. A “prevention and control” plan, prepared in January 2020, included training medical staff, preparing medical and quarantine facilities, and informing the public (including tourism workers) about symptoms and precautions. So, when the first three reported cases were confirmed on March 11, arrangements were in place to trace and isolate contacts, mobilise medical students for nationwide door-to-door surveys to identify vulnerable people and check for symptoms, and roll out a testing programme.

On March 20, with 21 confirmed cases reported, the government announced a ban on tourist arrivals, lockdown for vulnerable people, provision for home working, reassignment of workers to priority tasks, employment protection and social assistance.

As issues arose, the Cuban government adjusted its response. For example, when face-masks and physical distancing proved insufficient to keep public transport safe, services were suspended and state and private vehicles and drivers were hired to transport patients and essential workers. And to reduce crowding in shops, the distribution system was reorganised and online shopping introduced. Physical distancing enforcement has also been stepped up in response to instances of non-compliance.

With 766 reported cases by April 15 (68 cases per million of population), Cuba is around the middle of the range for Latin America and the Caribbean. 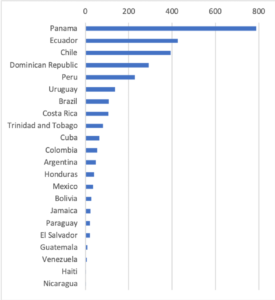 The quality of data varies hugely between countries, with some governments substantially under-reporting cases. Cuba’s reported cases are based on tests using WHO protocols. Two Caribbean neighbours, using similar methods, provide useful comparisons. The Dominican Republic, the most closely comparable in terms of population, income and tourism dependence, shows how the disease might have spread if measures had been less effective. In contrast, Jamaica seems to have succeeded in halting the spread of the disease. 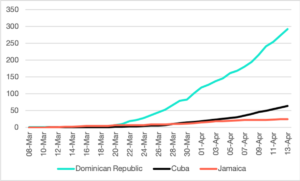 Jamaica’s initial response was similar to Cuba’s, but fewer cases had slipped into the country undetected before tourism was halted. Having identified 16 outbreak clusters now, Cuban authorities are still struggling to prevent a take-off.

What happens next in Cuba will depend largely on the amount of testing. An indicator of commitment to this task is the ratio of tests to reported cases. According to available data, Cuba (with 18,825 tests done) leads the region with a ratio of 25:1, compared with 16:1 in Jamaica and 3:1 in the Dominican Republic. (Vietnam and Taiwan have over 100:1, Germany 10:1, US 5:1 and UK 4:1.) Around 40% of Cuba’s recent positive results are from asymptomatic cases.

If Cuba’s contact-tracing and testing regime gets the disease under control, its experience might offer lessons for controlling the pandemic, and more of its doctors will be available to help with the effort to combat the pandemic abroad.

But tests are expensive, at around US$50 each, so if its hard-fought battle against COVID-19 is prolonged, Cuba’s lack of access to finance could prove fatal.

As the United Nations prepares to vote for the 30th consecutive time to condemn the unjust, illegal, and immoral U.S. Blockade of Cuba, actions are scheduled around the country to say "The World Stands with Cuba!" END_OF_DOCUMENT_TOKEN_TO_BE_REPLACED

Sat., Oct. 29, 12 pm: March and Rally in Times Square, New York City on the occasion of the 30th presentation at the U.N. of the Cuban resolution against the U.S. Blockade. Other events around the country to be announced. END_OF_DOCUMENT_TOKEN_TO_BE_REPLACED