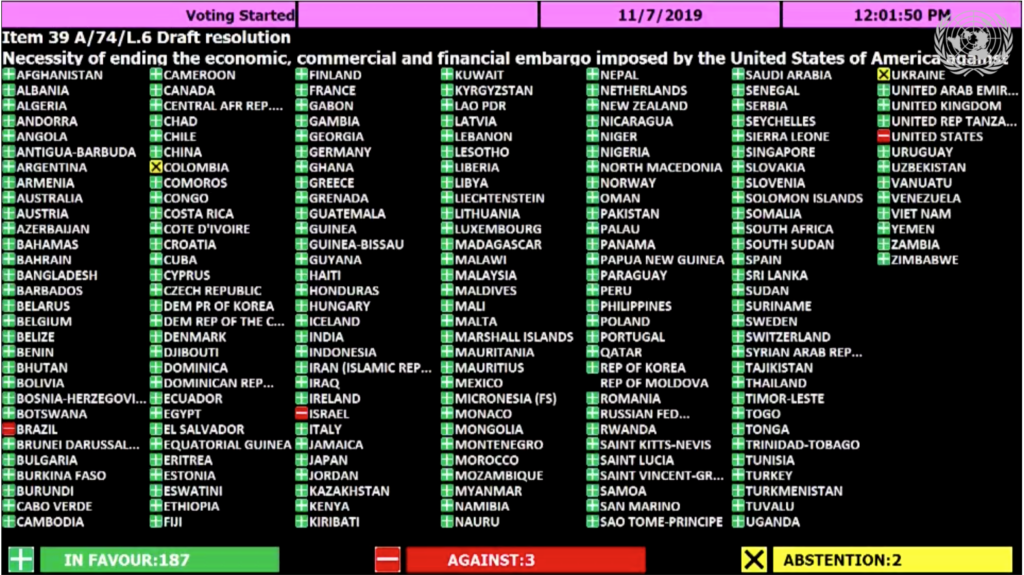 For the 28th consecutive year, the United Nations General Assembly voted overwhelmingly to condemn the immoral, unjust, and completely illegal U.S. blockade of Cuba. 187 countries joined together to condemn the blockade; the usual duo of the United States and Israel voting No on the resolution were joined this year by Brazil, now led by the fascist Jair Bolsonaro. The U.S. government has been applying intense pressure on countries around the world to join them; that they could only persuade Brazil to do so, as well as convincing Ukraine and Colombia to abstain, represents a tremendous victory for Cuba. ¡Viva Cuba! ¡Abajo el Bloqueo!

As the United Nations prepares to vote for the 30th consecutive time to condemn the unjust, illegal, and immoral U.S. Blockade of Cuba, actions are scheduled around the country to say "The World Stands with Cuba!" END_OF_DOCUMENT_TOKEN_TO_BE_REPLACED

Sat., Oct. 29, 12 pm: March and Rally in Times Square, New York City on the occasion of the 30th presentation at the U.N. of the Cuban resolution against the U.S. Blockade. Other events around the country to be announced. END_OF_DOCUMENT_TOKEN_TO_BE_REPLACED