The Embargo Against Cuba is Still in Force 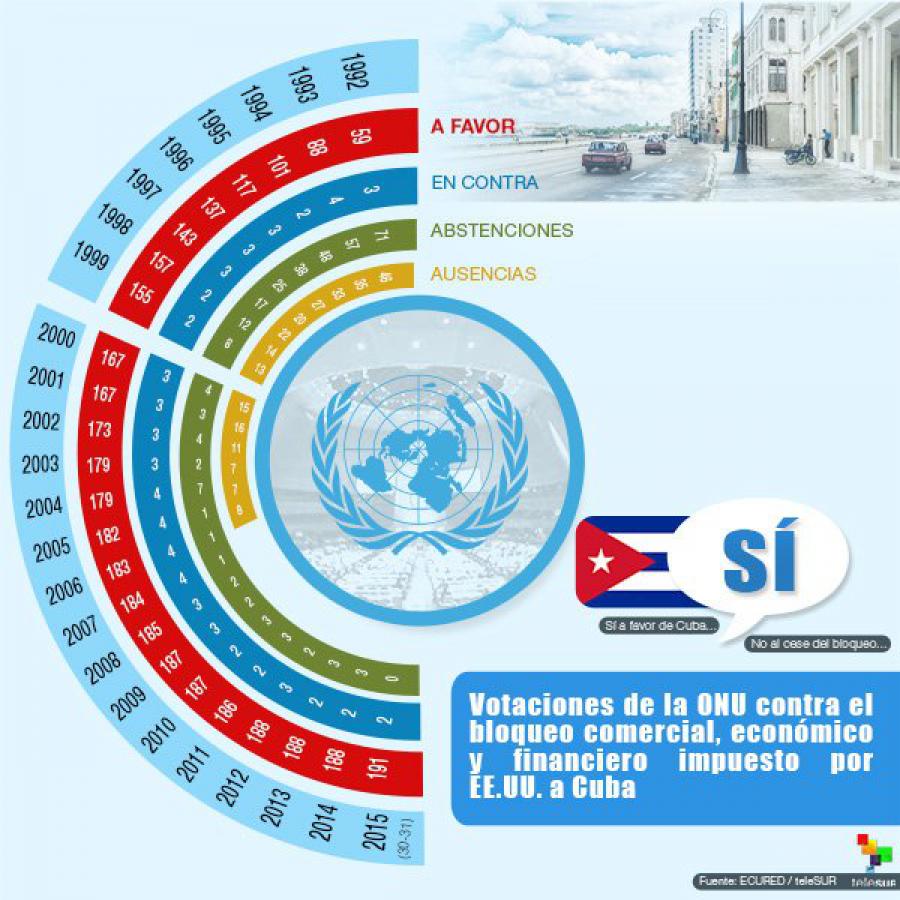 The economic, commercial and financial Embargo imposed by the United States Government against Cuba persists and continues to have profound impact on the Cuban people. This policy substantially limits Cuba’s right to development, being its principal obstacle.

Despite the reiterated calls of President Obama on Congress to put an end to the Embargo and the measures taken so far by the White House, which are positive but insufficient, the financial persecution on Cuban transactions abroad and the extraterritorial scope of the Embargo have remained unchanged.

The strengthening of the U.S. Government´s financial persecution policy on Cuba’s international transactions is evidenced by the imposition of multimillion-dollar fines on dozens of banking entities. The intimidation effect and the refusal of banks to do business with Cuba have also been stressed. Fear persists within the United States banking sector and that of third countries, as regards developing relations with Cuba, even when the United States has authorized the use of the U.S. dollar in the Island’s international financial transactions.

The economic, commercial and financial Embargo is not merely a bilateral matter between the United States and Cuba. Its extraterritorial nature is maintained and applied thoroughly, with total impunity and in open violation of International Law.

The reiterated calls of President Barack Obama to put an end to this policy against Cuba are not enough. He must be consistent and make maximum use of his executive powers to empty the most substantial content of the Embargo, once and for all. This would meet the claims of the international community regarding that policy.

The total elimination of the Embargo is an essential step to move towards the normalization of bilateral relations between the United States and Cuba. It must be accomplished unilaterally and unconditionally by the Government of the United States.

The Embargo against Cuba must end. It is the most unfair, severe and prolonged system of unilateral sanctions ever applied against any country. On 24 occasions, the UN General Assembly has overwhelmingly spoken out, in favor of respect for International Law and in compliance with the Principles and Purposes enshrined in the UN Charter.

Once again, Cuba and its people rely on the support of the international community in their legitimate claim to put an end to the economic, commercial and financial Embargo imposed by the United States Government. (Permanent Mission of Cuba to the United Nations)

As the United Nations prepares to vote for the 30th consecutive time to condemn the unjust, illegal, and immoral U.S. Blockade of Cuba, actions are scheduled around the country to say "The World Stands with Cuba!" END_OF_DOCUMENT_TOKEN_TO_BE_REPLACED

Sat., Oct. 29, 12 pm: March and Rally in Times Square, New York City on the occasion of the 30th presentation at the U.N. of the Cuban resolution against the U.S. Blockade. Other events around the country to be announced. END_OF_DOCUMENT_TOKEN_TO_BE_REPLACED