Gerardo Hernández and Adriana Pérez on the “Wasp Network” 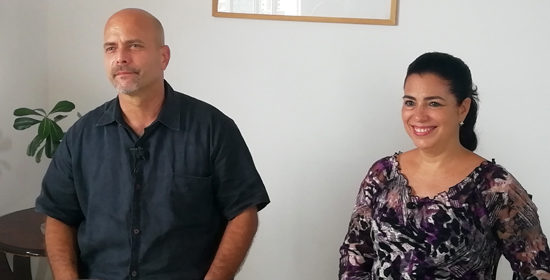 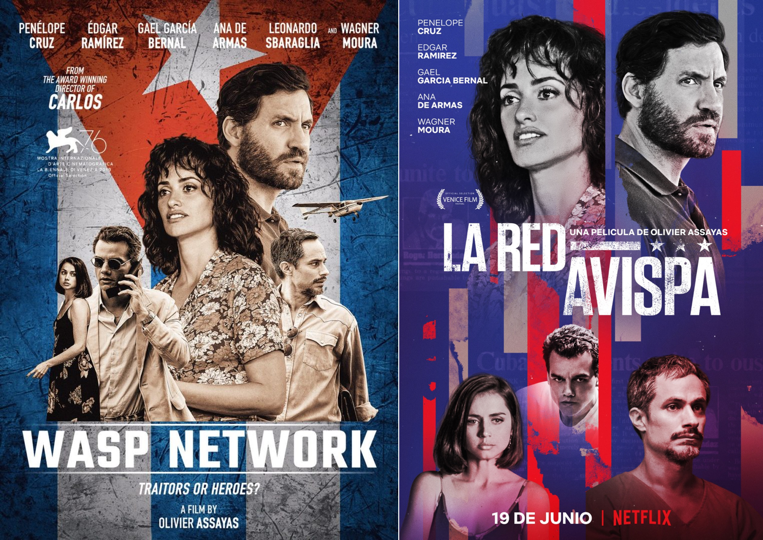 [The “Wasp Network” is a film released this past June, available for viewing on Netflix. It tells the story of the Cuban Five, the five men — Gerardo Hernández, René González, Fernando González, Antonio Guerrero, and Ramón Labañino — who were unjustly imprisoned in the United States for many years for the “crime” of trying to prevent acts of terrorism against Cuba. The predecessor of this committee, the National Committee to Free the Cuban Five, spent many years working for their freedom. In the interview which follows, Cubainformación TV talks with Gerardo Hernández and his wife Adriana Pérez.

The film is definitely worth watching, but if you are unfamiliar with the story of the Cuban Five, we strongly recommend first watching the documentary film “Mission Against Terror”, which can be found on YouTube: https://youtu.be/CCdGdpeNps8. You can also read an introduction to the case on our old website here, and review a timeline of the history here.]

“The same people who do not want normal Cuba-US relations boycott the Wasp Network”: Gerardo Hernández and Adriana Pérez

Accused of being spies, five of them – known as The Cuban Five, The Five Cuban Heroes, spent almost sixteen years as prisoners of the United States. Gerardo’s wife, Adriana Pérez O´Connor, is played by actress Anel Perdomo. We’re talking to both of them, live from Havana.

Adriana Pérez believes that, despite minor errors or inaccuracies, the importance of the film is that it “reflects the necessity of Cuba” at the time of sending people to the United States to collect information, with the aim to prevent terrorist attacks and deaths. “The film lays bare the terrorism directed against Cuba,” and any errors it may have, “are secondary to the goal of reflecting the terrorism we’ve suffered.” Adriana calls for “everyone, if they can, to see ‘La Red Avispa’ and look up any information you may still be missing” about The Cuban Five, online or elsewhere.

Gerardo Hernández Nordelo, Hero of the Republic of Cuba, finds it “typical” that in the “extreme exile” of Miami the movie is disliked and boycotted, because these people are the same people who do not want normalized relationships between Cuba and the United States. He denounces these boycotts: “They say they want freedom for Cuba, but they want to ban a movie: what kind of freedom is that?”

To those who feel insulted by the on-film portrayals of terrorists, he challenges them to answer the question: “Have they considered that Luis Posada Carriles (perpetrator of numerous attacks and dozens of murders) is a terrorist? I know for sure they’d say no, no he isn’t,” he claims.

We asked Hernández, who is today the national Vice-Coordinator of the CDR (Committees for the Defense of the Revolution) in Cuba, about the organization Brothers to the Rescue, which has been portrayed in the media, over the years, as a humanitarian organization, but in the film appears as a hub for drug trafficking and terrorism. Gerardo recounted how, in the years when Brothers to the Rescue dedicated itself to helping the balseros [rafters who used rafts to leave Cuba for the United States], who they gave food and water, “they never had trouble with the Cuban authorities” until it discovered the terrorism handbook of their leader, José Basulto, an ex-CIA agent who committed acts of sabotage and who fired at a civilian hotel in Cuba. But in 1995 things changed. According to the immigration policies Cuba-US and the political support in the United States for the “pies secos, pies mojados” [“wet foot, dry foot”] policy, the balseros stopped being rescued by the US Coast Guard in the Gulf. Those who donated money for the supposed “humanitarian mission” of the Brothers stopped donating. And the organization began direct provocation, violating the air space of Cuba, disobeying the civil aviation orders of the island and putting airspace navigation in danger, flying over Havana, without permission, on numerous occasions.

Gerardo explained that “if the FBI paid people who, from within, became informants on the activities of Brothers to the Rescue, it’s because they knew its activities, of the arms they mobilized and their terrorist plans.”

The film portrays the destruction, from the point of view of the Cuban Revolutionary Armed Forces (FAR), of two Brothers planes that – according to press in Miami – only dropped leaflets over Havana. Gerardo directly accuses them of being responsible for the deaths of the four young men who flew the planes. “I grieve these deaths profoundly,” he says, and blames these deaths on the United States government. He remembers how Cuba sent sixteen diplomatic notes that asked the US to revoke the flight authorization of that organization, to stop these pilots from incurring upon the airspace of Cuba, but “they did nothing.” He also reflected: “Imagine if this happened in the U.S. Someone like José Basulto, the leader of the Brothers, who in the past had committed terrorist acts and in 1962 fired a cannon on a civilian hotel in Cuba, says that their flights are peaceful but violate the air space of the United States and fly over Washington D.C. to ‘drop propaganda.’ How many minutes would they have remained alive?”

Hernández remembers that among the people who did the most to prevent these deaths was Juan Pablo Roque, who pleaded with Basulto, many times, “don’t do this, don’t enter Cuban air space,” precisely “because he was implying what would happen,” clarifies Gerardo who was his superior during those years.

Juan Pablo Roque, a Cuban pilot, faked his desertion at Guantanamo Bay. After completing his reconnaissance mission in Miami, he returned to Cuba with the help of Gerardo Hernández himself, the leader of the Wasp Network. He believes that the film — like the book upon which it’s based, “The Last Cold War Soldiers” — is unfair to Roque, who is portrayed as some sort of opportunist. “I have to say that Juan Pablo Roque is a patriot, a Cuban revolutionary who made an enormous sacrifice for this country. And the image that’s portrayed has to do with the part he had to play to complete this particular operation,” he explained.

He insists that neither he nor Roque had involvement or knowledge of the decision to shoot down the planes. He recounts how they did, once or twice, put on a show of denouncing an alleged plan premeditated by Fidel and Raúl Castro to shoot down these planes in international waters. Both leaders would have been brought to the International Criminal Court. After Gerardo was found guilty, vengeance came: two consecutive life sentences, two years in solitary confinement without having committed misconduct and another twelve years without seeing his wife.

The movie is based on true events, but some liberties have been taken. Adriana Pérez clarifies, for example, that she didn’t know about her husband’s mission until he was detained in the United States. At that point, the Cuban Security told her everything. Until then, she had believed her husband was studying abroad.

Gerardo Hernández confirms that there was a nexus of drug trafficking and “anti-Castro” organizations in Miami, as portrayed in the movie, and remembers that these facts “were not invented.” For example, he confirms that his comrade René González, pilot and main character of the film, did become involved in a drug-running operation in Central America, and afterward denounced the actions to the FBI on orders of his supervisor Gerardo. In addition, he says, that these people were arrested by the FBI based on information from a Cuban agent and later they were imprisoned together.

Adriana Pérez emphasizes the courage of the Cuban Five, who “earned no reward for their work, who did this from a pure heart, as Cuba always does,” despite risking their lives and leaving behind what they love most.

On the appearance, also in Miami, of certain individuals who said that “several deserting Cuban agents” had sworn that the objective of the Cuban Five was to “obtain information about U.S. Southern Command, to infiltrate military bases in Florida,” “smuggle weapons into the United States,” and even “set fire to air hangars,” Gerardo Hernández recalls the factory of liars that is the city of Miami. “If anything of that, even the bare minimum, were true, if they could have proved it, they would have accused us of terrorism, these are serious things, and they did not,” he explained.

Adriana remembers her journey around the world, along with Olga Salanueva, played in the film by Penélope Cruz, denouncing the unjust legal proceedings and the incarceration of the Cuban Five. She doesn’t want to mention, to be fair, the names of organizations and individuals who helped gain freedom for the Five, because there were hundreds. But she does comment on the role of Patrick Leahy, at that time president of the U.S. Senate, a key man for contact with Barack Obama and ultimately the return of three Cuban heroes still imprisoned (two of them had already been returned to Cuba after completing their sentences).

Cubainformación and the Latin American Review consider it a true honor to have spent time, once again, with Gerardo Hernández and Adriana Pérez.

The complete interview in Spanish, 53 minutes long, can be viewed on YouTube:
https://youtu.be/oWD6zrsI5E4

As the United Nations prepares to vote for the 30th consecutive time to condemn the unjust, illegal, and immoral U.S. Blockade of Cuba, actions are scheduled around the country to say "The World Stands with Cuba!" END_OF_DOCUMENT_TOKEN_TO_BE_REPLACED

Sat., Oct. 29, 12 pm: March and Rally in Times Square, New York City on the occasion of the 30th presentation at the U.N. of the Cuban resolution against the U.S. Blockade. Other events around the country to be announced. END_OF_DOCUMENT_TOKEN_TO_BE_REPLACED