United Nations votes to condemn the U.S. blockade of Cuba for the 29th time 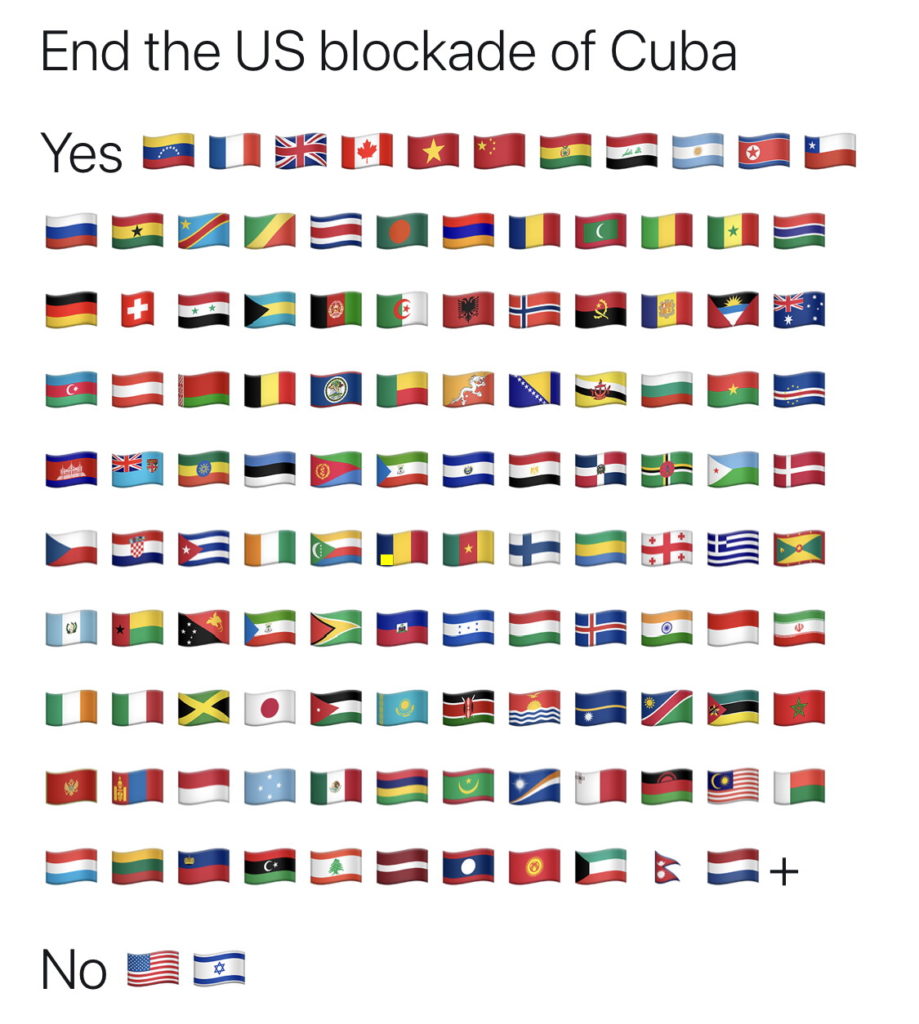 UNITED NATIONS, June 23, 2021 — The Democratic platform in 2020 pledged to “move swiftly to reverse Trump Administration policies that have undermined U.S. national interests and harmed the Cuban people and their families in the United States, including its efforts to curtail travel and remittances.” Not only hasn’t President Joe Biden “moved swiftly” on even the specific promises of re-expanded travel to Cuba and family remittances, but today his Administration dashed all hopes that even small changes can be expected, as the U.S. voted against the U.N. resolution condemning the U.S. blockade of Cuba, joined only by its loyal lapdog Israel. 184 nations voted for the resolution, with three abstentions, as the resolution passed for the 29th consecutive time.

In the last year of the Obama Administration, the U.S. abstained on the vote, resulting in the first (and now only) time that there wasn’t a single country on record opposing the resolution. But any hope that the U.S. would repeat that abstention were dashed when its representative delivered a stridently anti-Cuban speech, hypocritically claiming that the U.S. “stands with the Cuban people” and vigorously defending sanctions as “a legitimate way to achieve foreign policy.” The failure to make even small changes in Cuba policy cannot be laid at the feet of Joe Manchin, or of the Republicans in Congress, but lies squarely on the shoulders of President Joe Biden. Given the hardships that the Cuban people are facing as a result of those very sanctions, the despicable nature of his Administration’s claim to “stand with the Cuban people” is all the greater.

The United States and its mass media frequently speak about “world opinion”, but the real world opinion was on display during the more than 3-hour debate on the resolution. Speaker after speaker condemned the U.S. blockade as a violation of both international law and the U.N. Charter, facts which were pointedly omitted from press coverage by the New York Times and Washington Post. Speakers also noted the particularly pernicious nature of the blockade in the face of a worldwide pandemic. Those speakers represented not just individual countries but large groups of countries including the Non-Aligned Movement, the Group of 77 plus China, the Africa Group, ASEAN, CARICOM, and the Organization of Islamic Cooperation.

What was perhaps most striking about the speeches was that virtually all of them not only denounced the U.S. blockade, but spoke glowingly about Cuba as well. Cuba’s medical assistance abroad was mentioned frequently, particularly its worldwide efforts assisting dozens of countries in their fight against Covid. Cuba was also repeatedly praised for its success in developing multiple vaccines against Covid. The representative of South Africa mentioned the essential role that Cuba played in overthrowing apartheid in their country. Cuba had been promoting the hashtag #ElMundoDiceNo (“The world says “No” [to the blockade]”), but the message of the speeches was actually the opposite — “The world says “Yes”…to Cuba”. Rarely if ever has one country received as much praise from so many other countries as Cuba did today during the debate condemning the U.S. blockade.

Cuban Foreign Minister Bruno Rodríguez Parilla delivered Cuba’s message [text in Spanish and English; English-language video here and below]. He not only denounced the blockade as a violation of international law and the United Nations Charter, but also as “a massive, flagrant and  systematic violation” of the human rights of the Cuban people, arguing that under the 1948 Geneva Convention the blockade qualifies “as an act of genocide.”. He spoke of the estimated losses to the Cuban economy of $9 Billion in 2020, and quoted the infamous 1960 memo in which the purpose of the blockade was laid out very clearly: “to bring about hunger, desperation, and overthrow of government.” Its purpose remains the same today.

The United States government and its Secretary of State Anthony Blinken have spoken repeatedly recently about the U.S. devotion to the “rules-based order.” Nothing demonstrates the utter hypocrisy of this claim as much as the fact that the U.S. will now ignore, for the 29th consecutive year, the overwhelming demand of the world that it end the blockade and cease violating both international law and the U.N. Charter. The people of the United States must now redouble our efforts to bring this despicable policy of the U.S. government to an end.

As the United Nations prepares to vote for the 30th consecutive time to condemn the unjust, illegal, and immoral U.S. Blockade of Cuba, actions are scheduled around the country to say "The World Stands with Cuba!" END_OF_DOCUMENT_TOKEN_TO_BE_REPLACED

Sat., Oct. 29, 12 pm: March and Rally in Times Square, New York City on the occasion of the 30th presentation at the U.N. of the Cuban resolution against the U.S. Blockade. Other events around the country to be announced. END_OF_DOCUMENT_TOKEN_TO_BE_REPLACED