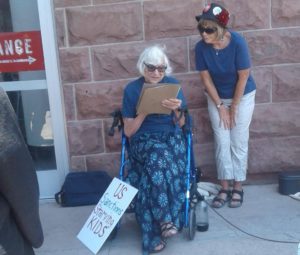 A courageous woman known and beloved in Albuquerque, New Mexico for her longstanding activism in countless social justice causes, has decided to put her life on the line to draw attention to the children starving and dying in U.S. war zones.

Sally-Alice Thompson, 96 years old and with energy and spirit of someone decades younger, has been moved to act personally: “I grieve for the children of Venezuela, Cuba, North Korea, and Iran, who are suffering because of the illegal sanctions imposed on those sovereign nations. I grieve for the hungry children of Gaza and Yemen, children who are hungry because of my country’s support for immoral sieges that deliberately prevent food from entering the places where they live. I remember and grieve for the children who died as a result of our sanctions on Iraq, in order to push their parents to overthrow Saddam Hussein.”

Recently, in April, during a public forum of the Party for Socialism and Liberation, she and her friend Marcy Matasick, both of the singing group Raging Grannies, surprised the crowd with a rendition of the Beatles tune, “Let It Be,” but with a new title, “Let Them Be,” referring to the people of Venezuela and demanding an end to the sanctions.

Thompson is already on her fourth day of the hunger strike, a precarious situation given her age. But her response to those who express concern:

“The short remainder of my life is inconsequential.  The remainder of the lives of those children may be very important.  If allowed to develop normally, who knows what they may become?  Are we depriving the world of a future great composer?  Or maybe a talented playwright?  One can only speculate, because they’re dying of starvation.

“Those children have a right to live!

“Permitting our country to continue down this road of genocide is completely unacceptable. So I have decide that instead of asking, ”Why doesn’t somebody do something about it?”  I looked in the mirror and said, “You’re somebody, do something.’

She is inviting anyone who agrees to join her in her fast, “by skipping a meal or fasting for a day or longer.  “I would like to know and thank anyone who joins me. Please contact me at sally-aliceanddon@juno.com. I hope this can start a movement to eliminate sanctions and sieges. Please help me: demand that we lift all sanctions and cease all sieges!”

We salute Sally-Alice Thompson, who has always walked the talk. No Sanctions, No Coups, No War! Let the Children Live!

As the United Nations prepares to vote for the 30th consecutive time to condemn the unjust, illegal, and immoral U.S. Blockade of Cuba, actions are scheduled around the country to say "The World Stands with Cuba!" END_OF_DOCUMENT_TOKEN_TO_BE_REPLACED

Sat., Oct. 29, 12 pm: March and Rally in Times Square, New York City on the occasion of the 30th presentation at the U.N. of the Cuban resolution against the U.S. Blockade. Other events around the country to be announced. END_OF_DOCUMENT_TOKEN_TO_BE_REPLACED