Statement from the Ministry of Foreign Affairs of Cuba 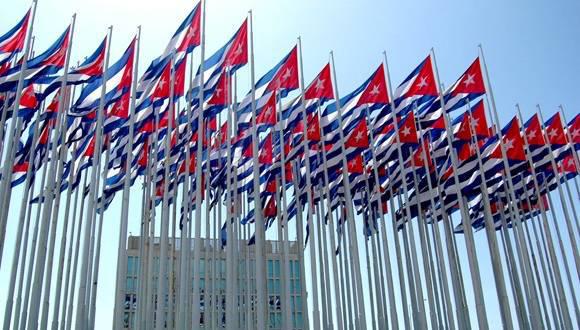 On January 16, 2019, the United States State Department announced the decision to suspend for only 45 days the application of Title III of the Helms-Burton Act, “to conduct a careful review… in light of the national interests of the United States and efforts to expedite a transition to democracy in Cuba and include factors such as the Cuban regime’s brutal oppression of human rights and fundamental freedoms and its indefensible support for increasingly authoritarian and corrupt regimes in Venezuela and Nicaragua.”

The government of President Donald Trump threatens to take a new step that would dangerously reinforce the blockade against Cuba, flagrantly violate International Law, and directly attack the sovereignty and interests of third countries.

Cuba rejects this threat in the most energetic, firm and categorical way. It regards it as a hostile act of extreme arrogance and irresponsibility, while condemning the disrespectful and slanderous language of the State Department’s public message.

The Helms-Burton Act came into force in 1996. It was devised to codify and tighten the economic, commercial and financial blockade policy, officially imposed in 1962, with the aim of subverting and overthrowing the Cuban government, and imposing a regime to the liking of the United States government.

It consists of four titles and has been applied since its promulgation. It is characterized by its extreme extraterritorial scope, as it violates the norms and principles of International Law, contravenes the rules of international trade and economic relations, and is harmful to the sovereignty of other States, in particular through the application of its provisions against companies and people established in their territory.

It has been almost unanimously rejected by the international community in the United Nations, in specialized international organizations, and in regional organizations such as the Community of Latin American and Caribbean States and the African Union. Several countries have national laws to deal with the extraterritorial effects of this law.

Among the key objectives of the Helms-Burton Act is to hamper Cuba’s economic, commercial and financial relations with third countries, and undermine its ability to attract direct foreign capital investment for its development. Titles III and IV of the law are expressly devoted to this purpose.

Title III establishes the authorization for United States nationals to file suits before U.S. courts against any alien who “traffics” U.S. property that was nationalized in Cuba in the 1960s, in a legitimate process, as recognized by the Supreme Court of the United States, carried out by the Cuban government in full compliance with national law and International Law.

Among the most significant aberrations, this title extends this authorization to owners who were not citizens of the United States at the time of the nationalizations, and whose alleged possessions no one has certified.

Under the provisions of the Helms-Burton Act itself, all U.S. Presidents since 1996, including Trump in 2017 and 2018, have made consecutive use of executive power to suspend the application of Title III every six months, recognizing that it consists of the grossest and most unacceptable aspect of this law, contrary to International Law and the sovereignty of other States. Also understanding that its application would pose insurmountable obstacles for any prospect of settling claims and compensation for legitimate U.S. owners.

For its part, the People’s Provincial Court of Havana, on November 2, 1999, upheld the lawsuit filed against the United States Government for Human Damages, and sentenced it to pay reparations and compensate the Cuban people to the amount of $181.100 billion dollars and, on May 5, 2000, also for Economic Damages caused to Cuba, and sentenced it to pay $121 billion dollars.

The Ministry of Foreign Affairs has reiterated Cuba’s willingness to find a solution to the mutual claims and compensations.

This decision that the United States government threatens to adopt would imply that, contrary to what is established in International Law and the practice of international relations, foreign individuals and entities with legitimate businesses in Cuba may face the threat of unfounded and illegitimate claims before courts of the United States. The politically motivated and venal behavior of certain courts in Florida, frequently used as a weapon against Cuba, is well known.

For our people, it means once again resolutely, consciously and forcefully confronting the insistence of U.S. imperialism to subjugate the destiny of the Cuban nation to its dominion and tutelage.

If Title III is applied as established by this law and as the announcement of the Department of State threatens, any Cuban and every community in the country will see claims brought before United States courts for ownership of the housing they occupy, their workplace, the schools their children attend, the polyclinics where they receive medical attention, the land on which their neighborhoods are built; and they will be able to observe the aim of usurping the country’s wealth, infrastructure, arable land, industries, mining resources, energy potential, and the foundations on which science and technology are developed and services provided to the population.

We should all recall the aberrant contents of the Plan Bush that describes and sets out in detail how Cuban families and the country would be deprived of practically everything.

For more than twenty years, the Helms-Burton Act has guided the interventionist efforts of anti-Cuban sectors in the United States to attack the Cuban nation and undermine its sovereignty. By virtue of its application, hundreds of millions of dollars have been approved to subvert the domestic order in Cuba, and innumerable measures have been put in place to try to provoke regime change. Its economic impact has implied a high cost for the country’s development efforts and for the welfare of the population, with a humanitarian impact that is no greater thanks to the social justice system that prevails in Cuba.

The intention to fully apply Title III is promoted against the criteria of major U.S. government agencies, and as a consequence of the power and influence on the government of people whose political careers have been marked by impotent resentment against Cuba, and based on the use of lies and blackmail.

The majority of the United States public consistently opposes the economic blockade, as recognized by the most respected surveys.

History records with sufficient clarity that the policy of economic blockade and the bilateral problems between Cuba and the United States do not have their origin in the just nationalizations that, according to the law and with legitimate rights, were carried out by the revolutionary government. The military, economic and terrorist attacks of the United States government against Cuba began before the fundamental nationalization acts of U.S. properties took place.

It is well-known that all nationalizations of foreign property, including that of the U.S., were provided by law with a commitment to compensation, which the U.S. government refused even to discuss, while it was adopted by the governments of claimants of other countries, all of which enjoyed due compensation.

The Ministry of Foreign Affairs reiterates the postulates of the Reaffirmation of Cuban Dignity and Sovereignty Act (Law No. 80), and emphasizes that the Helms-Burton Act is unlawful, unenforceable, void and without legal effect. Consequently, it will consider null all claims based on it by individuals or legal entities, whatever their citizenship or nationality.

The government of Cuba reserves the right to duly respond to this new aggression.

The U.S. is planning its next provocation in Cuba on Nov. 15. Its paid agents in Cuba have announced marches in various Cuban cities on that date, the very day that Cuba will reopen to international tourism and Cuban schools will reopen with a nearly fully vaccinated population. Across the U.S. on the weekend of Oct. 30-31, actions are planned to oppose these provocations and Let Cuba Live! End the Blockade! END_OF_DOCUMENT_TOKEN_TO_BE_REPLACED