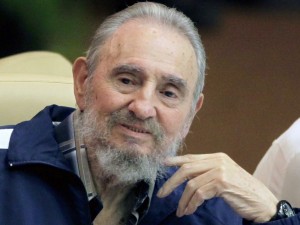 I share the unanimous opinion of those who have congratulated you for your brilliant, valiant speech on the night of December 6, as soon as the election’s outcome was announced

In world history, the highest level of political glory which a revolutionary can reach, is that of the illustrious Venezuelan combatant, Liberator of America, Simón Bolívar, whose name now belongs not only to this sister country, but to all peoples of Latin America.

Another Venezuelan official of honorable legacy, Hugo Chávez, understood and admired him and struggled for his ideas until the last moment of his life. As a boy, attending elementary school in the country where the poor children of Bolívar were obliged to work to help support their families, he developed the spirit in which the Liberator of America was forged.

The millions of children and youth who today attend the largest and most modern system of public schools in the world are Venezuelan. More can be said about the country’s network of medical care centers and the attention paid to the health of its people, brave but poor as a result of centuries of plunder by Spanish colonialism, and later by huge transnationals, which for more than 100 years extracted from its entrails the best of the immense oil reserves nature bestowed on this country.

History also bears witness that workers exist, and make possible the enjoyment of nutritious food, medicine, education, security, housing and the world’s solidarity. You could ask the oligarchy, if you like: Do you know all of this?

Cuban revolutionaries – just a few miles from the United States, which always dreamed of taking possession of Cuba to make it a hybrid casino-brothel, as a way of life for the children of José Martí – will never renounce their full independence or respect for their dignity.

I am sure that human life on Earth can only be preserved with peace among all peoples of the Earth, and acknowledgement of the right to make the planet’s natural resources common property, as well as the sciences and technologies created by human beings to benefit all of its inhabitants. If humanity continues along the path of exploitation and the plunder of its resources by transnationals and imperialist banks, the representatives of states meeting in Paris, will draw the relevant conclusions.

Security does not exist today for anyone. There are nine states which possess nuclear weapons. One of them, the United States, dropped two bombs which killed hundreds of thousands of people in just three days, and caused physical and psychological harm to millions of defenseless people.

The People’s Republic of China and Russia know the world’s problems much better than the United States, because they were obliged to endure the terrible wars imposed on them by fascism’s blind egoism. I do not doubt that, given their historical traditions and their own revolutionary experience, they will make the greatest effort to avoid a war and contribute to the peaceful development of Venezuela, Latin America, Asia and Africa.

As the United Nations prepares to vote for the 30th consecutive time to condemn the unjust, illegal, and immoral U.S. Blockade of Cuba, actions are scheduled around the country to say "The World Stands with Cuba!" END_OF_DOCUMENT_TOKEN_TO_BE_REPLACED

Sat., Oct. 29, 12 pm: March and Rally in Times Square, New York City on the occasion of the 30th presentation at the U.N. of the Cuban resolution against the U.S. Blockade. Other events around the country to be announced. END_OF_DOCUMENT_TOKEN_TO_BE_REPLACED